Remember your wedding photos from way back? The photographer staging you and your new life-partner to make you both look dreamily happy, the perfect couple. On occasion the camera-crazed professional placed you in fake poses you never would have attempted by your own free will?

Spending an afternoon at a Caribbean resort popular, apparently, also with newlyweds, I observed such a couple. With the confidence of a film director, the local photographer had them perform some common embraces, associated with a couple madly in love. And then, positioning the love doves in some postured taken directly from my yoga classes; poses I am quite sure this couple never endeavored in their lives. This Hitchcock of a photographer was relentless in his pursue of romantic make-believe frames, moving the man a little to the right, the woman a little to the left, having her ride on top of him while he is on his knees, go on four below him while he spreads his legs wide, and so on and so forth.

It made me think of this couple five, or maybe ten years from now, that is, if they are still married. They may look though these photos and actually believe they assumed these poses on their accord, forgetting it was all staged. Memories can so easily be manipulated. We believe what we want to believe and remember what suits us best; especially when these mementos come in the form of photographs.

Learned from: a couple posing for wedding photos on the beach. 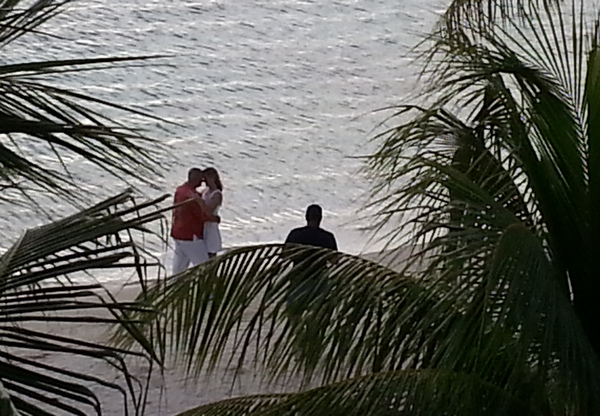 Ronen Divon had been walking spiritual and holistic paths for well over thirty years. Born in Israel, educated in New York, and currently residing in North Carolina, Ronen had traveled the world, spending time with teachers, masters, healers and guides. With wisdom that spans multiple traditions, including the Far East, India, Israel, Brazil, Peru, and Native America, Ronen remains a student, learning and adding modalities that will best serve his clients, each according to their own unique needs. Ronen is also a published author, a Yoga, Meditation, and Tai Chi instructor.
View all posts by Ronen →
This entry was posted in Life, Relationships and tagged love doves, love photos, make believe, memories, photographs, poses, staged photos, wedding photos. Bookmark the permalink.