Equality and the animal brain

Feeding my two cats in the morning, I often watch them after the food is served. Tess, the female, hungry as she may be, will step aside and let Ezra, the male, eat first. Not only does she curtails her hunger and waits, once he is done and leaves, she will wait several more minutes in case he changes his mind and decides to come back and feast some more. There is no equality – the Alpha male takes his first pick at the food.

Often I hear the argument that we too are just animals, that with us as well there is no need for seeking equality. Nature did not create us one and the same; some deserve more than others. To some degree, I tend to agree; we were not created equal. But ultimately it all boils down to prejudice and hidden agendas. Those who would cite that an Aryan race is more privileged than the Jews and Gypsies, and those who claim that Whites are superior to Blacks, use ethnicity to serve their ulterior motive. Those who suggest Christians are God’s choice over the Jews, Muslims and Hindus, or those who proclaim that Jews are the selected people; a light shining in the darkness to show the way to others, all hide behind religious dogma. Much in the same way, those who put Men above Women – unfortunately it is still the case worldwide, are biased towards gender. But let’s go back to nature.  In nature who prevails? The stronger, either by muscle or by wit. The result is that with some animal species, the male may have the strongest say, but this is not always the case. Baboons have a female dominated society. Elephants have a female matriarch as do hyenas. And what are we to say about the praying mantis female, who devours her male partner after the act of procreation? If we are indeed just a product of nature in the form of yet another savage animal, are we modeled after the baboons or the lions? Furthermore, if we are merely an animal, I doubt religion would have had any place in our society.

Nature, no doubt, has its order; some of which we understand, some we comprehend yet chose to ignore, and some we have no clue about thus we end up making assumptions. We, humans, have our place in this order. We were granted a brain more capable than most animals (though, truth be told, some people on the face of this Earth, on occasion, put this declaration to the test…) We, unlike most animals, can make a wider array of choices. We have built-in instincts but can also pause and reflect. If I am stronger than you, should I kick you out of the line and take your place? In nature that would be the obvious choice. If I am smarter, must I cheat someone who may be slower to think? If my skin is one color or another, my religious beliefs of one domination or another, my gender, the way I speak, the length of my hair, whether I am a righty or a lefty, does that make me more privileged than others? None of this has anything to do with nature. It has everything to do with a brain that schemes to get an advantage, that misunderstands what purpose we serve. Two quotes come to mind. Though not following religion, here is one I like from the Old Testament. Genesis 2:15 “The Lord God took the man and put him in the garden of Eden to till it and keep it.” Whether one is Jewish, Christian, Muslim or following another such path, I doubt any prophet changed this ancient purpose stated in Genesis. Yet, when we look around, what do we see? People who visit Church on Sunday, contaminate the oceans with oil come their workweek, those who go to Synagogue on High-Holidays, cheat their fellow men in the stock-market without giving it a second thought — God will surely understand and forgive them come Yom-Kipur, and those who pray in the Mosque on Friday kill each other, let alone others, on their way back home. All do their part in destroying the garden we were trusted to till and keep.

The other quote is from Shantaram, the 2003 novel by Gregory David Roberts: “The tendency towards complexity has carried the universe from almost perfect simplicity to the kind of complexity that we see around us, everywhere we look. The universe is always doing this. It is always moving from the simple to the complex.” This is not a mere statement about philosophy. Roberts nailed well the nature of things. As humans we are more complex than those who came before us. It is our role to be different than animals, to continue and evolve. Stopping prejudice and judgment of others is a good start.

Learned from: watching my cats eat… 🙂 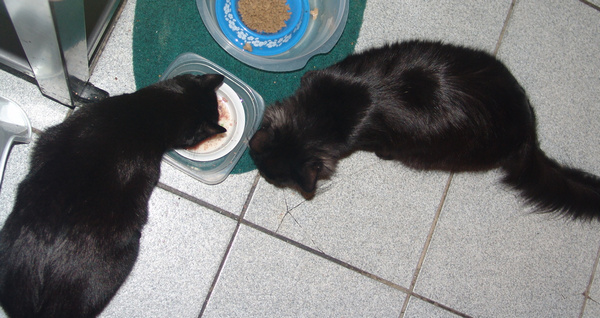 Ronen Divon had been walking spiritual and holistic paths for well over thirty years. Born in Israel, educated in New York, and currently residing in North Carolina, Ronen had traveled the world, spending time with teachers, masters, healers and guides. With wisdom that spans multiple traditions, including the Far East, India, Israel, Brazil, Peru, and Native America, Ronen remains a student, learning and adding modalities that will best serve his clients, each according to their own unique needs. Ronen is also a published author, a Yoga, Meditation, and Tai Chi instructor.
View all posts by Ronen →
This entry was posted in Life, Nature, Philosophy, Society and tagged alpha male, animals, bias, brain, choices, complexity, equality, ethnicity, evolve, gender, instincts, prejudice, racism, religion, universe. Bookmark the permalink.