When the phone rings and Murphy’s Law

If you forgot to switch your phone off, Murphy has it that it must ring just when the Yoga class you are attending is in deep in relaxation.
Such an incident, taking place during a Yoga class I instructed earlier this morning – where one of the participant’s phone went off, reminded me of a similar episode that happened to me when I participated in a class some years ago. I forgot to switch my phone off and, sure enough, during final relaxation, just as the instructor departed her final words, asking us to close our eyes and relax, I could hear my mobile chiming from my coat’s pocket, hanging at the studio’s dressing area. Stress immediately shot up my spine, shaking away much of the bliss gained during class. “Should I get up and turn it off, disclosing it’s mine and further disturbing the class, or should I ignore it? What if the person calling, continues trying time and again? Should I apologize to the class and the instructor?” These were just a few of the thoughts crossing my upset mind. I ended up doing nothing. Luckily the caller wasn’t persistent and just left a message, which announced itself with another short chime shortly after the last ring subsided.

After practice I told a friend, who took the class with me for the first time, that it was my phone that rang. I should mention here that my ringtone is of calming wind-chimes. “Really?” he responded, “and I thought it was part of this studio’s background music, intended to help us relax. I actually liked it…” Now I really felt like an idiot.

Since then, whenever someone’s mobile rings in a class that I instruct, unless it’s a really violent ringtone or a caller that insists on being heard, calling time and again, I tell the anonymous practitioner whose phone it is, that it’s okay, they can ignore the phone and just relax. Except if they are on call, they shouldn’t let a brief reminder of a demanding world out there, take away from their relaxed set of mind.

Learned from: a ringing mobile during a yoga class. 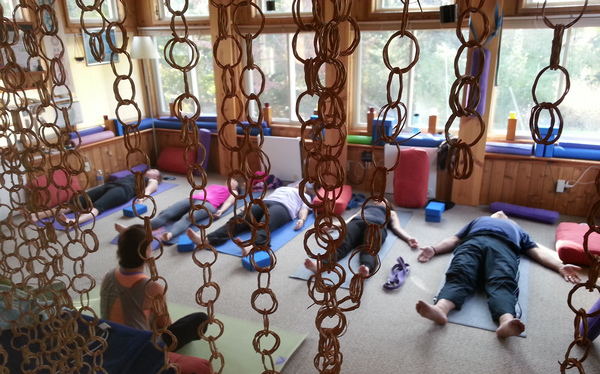 Ronen Divon had been walking spiritual and holistic paths for well over thirty years. Born in Israel, educated in New York, and currently residing in North Carolina, Ronen had traveled the world, spending time with teachers, masters, healers and guides. With wisdom that spans multiple traditions, including the Far East, India, Israel, Brazil, Peru, and Native America, Ronen remains a student, learning and adding modalities that will best serve his clients, each according to their own unique needs. Ronen is also a published author, a Yoga, Meditation, and Tai Chi instructor.
View all posts by Ronen →
This entry was posted in Life, Mind-Body, Technology, Yoga and Tai Chi and tagged embarrassment, mobile phone, murphy's law, peace of mine, relaxation, ring, ringtone, set of mind, timing, yoga. Bookmark the permalink.