As with so many other happenings in life, it started slow; inching its way forward without me giving it a second thought. But I am ahead of myself; I need to preface this statement.

I go on my Facebook page several times a day, briefly, (or so I want to believe,) making it quick breaks at work, in between never-ending tasks. I take a look at the notifications, new friends’ requests, and then scroll down along the news feed; my wall. I suspect that the first ones to go where “friends” vocalizing their undying love for the gun lobby. When their posts became all too tasteless – I went “unchecked,” and their “friendship” was gone; dissipating into the vastness of cyberspace.

Then arrived the looming elections. In quick succession I started to remove loud mouths to the right and to the left, though, admittedly, those who favored Trump and bashed everyone else were removed much faster than others. Mind you, I didn’t remove just anyone who didn’t agree with my views (that Trump is a horrible choice,) but rather only if they used foul and vulgar language. It is, I told myself, because I go on Facebook to chill out, not to read hate messages.

Then one day, actually this morning if to be more precise, I realized that I had methodically created for myself a mostly liberal bubble; a Trump-like wall if you like, isolating myself from a full and real representation of this country’s political landscape. Most of my Facebook friends, the two thousand plus I still have, are in favor of Sanders or Clinton. Thus, looking at my FB newsfeed I could not comprehend how is it that Trump seems to have so much support? Duh… It is because I twisted my reality. What I now see on my FB wall is anything but what is going on in the real world. My FB friends are all shocked by HB2, cry tears over Prince passing away, and detest the Kardashians. In other words, I became a FB God. As mentioned in Genesis: “Let us make man in our image.” The reflection of my FB reality is only what I wanted to see.

Learning this, should I reverse back to how my wall looked before the spring cleanup? I don’t think so. I like it as is; I am just aware it is my invention, fruits of divine design creation, not reality. 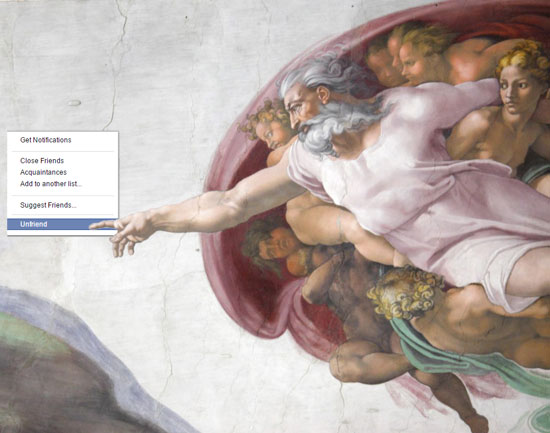 Ronen Divon had been walking spiritual and holistic paths for well over thirty years. Born in Israel, educated in New York, and currently residing in North Carolina, Ronen had traveled the world, spending time with teachers, masters, healers and guides. With wisdom that spans multiple traditions, including the Far East, India, Israel, Brazil, Peru, and Native America, Ronen remains a student, learning and adding modalities that will best serve his clients, each according to their own unique needs. Ronen is also a published author, a Yoga, Meditation, and Tai Chi instructor.
View all posts by Ronen →
This entry was posted in Life, Relationships, Society and tagged bubble, facebook, filter, friends, God, political, reality, social, unfriend, views, wall. Bookmark the permalink.